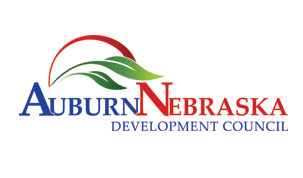 Auburn, one of the newest cities in Nemaha County, included three earlier towns within its city limits—St. George, Sheridan, and Calvert.

The 40 acres of St. George, now northeast Auburn, were platted in the 1850s. Sheridan was surveyed as a 160-acre town site in 1868, just a short distance west of St. George. Calvert began in 1881 as the result of a new railroad depot site being selected south of Sheridan. The site was selected by the Burlington and Missouri Railroad, who purchased the land and named it in honor of Thomas E. Calvert, a railroad official.

Under the leadership of Church Howe and Charles Nixon, the towns of Calvert and Sheridan incorporated into the town of Auburn on May 1, 1882. The city was named after Auburn, New York.

Auburn became the county seat of Nemaha County on February 27, 1883. Nixon and Howe sold the land for a city park for $5,000, which now includes the memorial “Avenue of Flags” honoring all veterans from Nemaha County.

A vestige of the past, Auburn still supports two “downtown” areas—one being the courthouse square and the other in Sheridan along with the crestview business district in south Auburn.

Auburn is Nebraska’s first Tree City USA, an honor they have held since 1976.